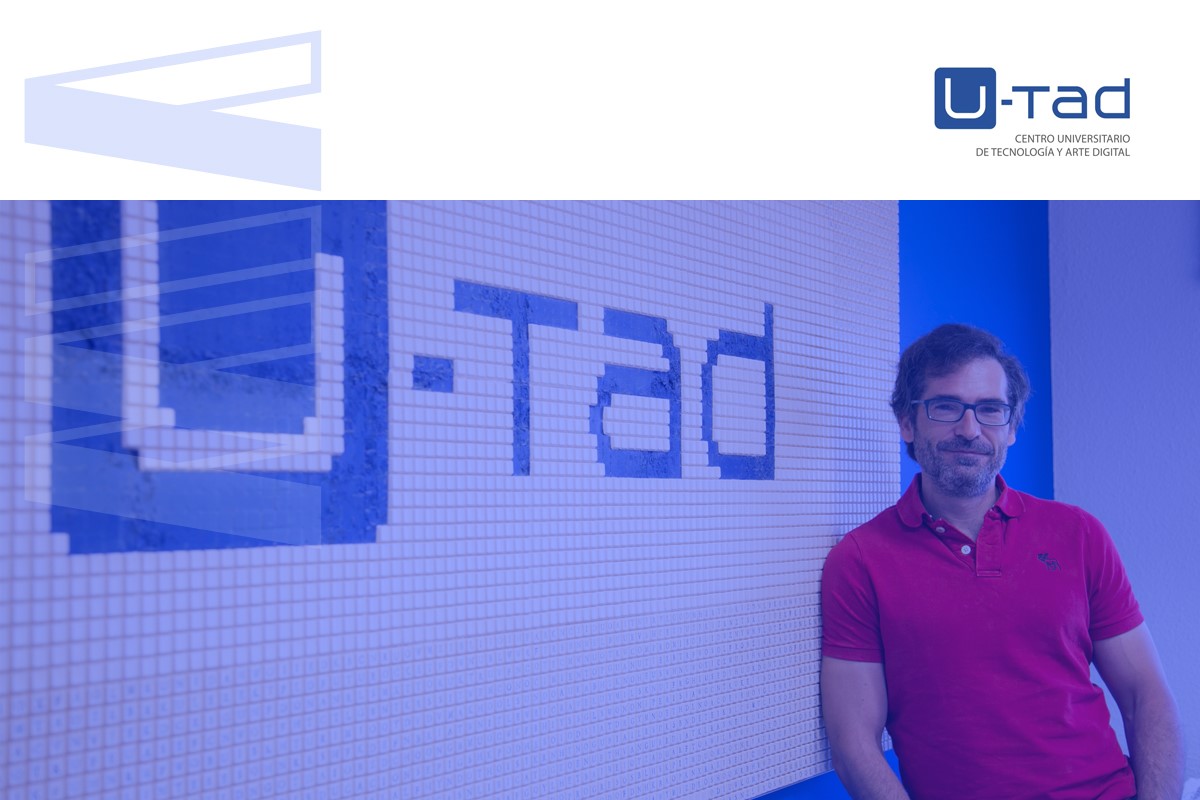 Ignacio Pérez Dolset (U-tad): “There is no other place in Spain for a project like ours”

Ignacio Pérez Dolset is one of the most important figures in the Spanish technology sector. He founded U-tad, a pioneering center for video games and animation, in 2011. Before that, he worked in the Spanish digital industry for twenty years, as founder of Pyro Studios, producer of the game Commandos, and of Ilion Animation, responsible for the film Planet 51. If he launched himself into the world of education, it was because he knew that “in any business, human capital is crucial”

Mr Pérez Dolset welcomes Madrid Investment Attraction at the U-tad headquarters, located in a business park in Las Rozas. In this interview he tells us the secrets of the success of this training project and his vision of the business ecosystem and the role of the Administration.

M.I.A.: First of all, could you briefly define U-tad?

I.P.D.: U-tad is a university center dedicated to digital training that came to fill a void, as there was a lack in Spain of projects like this. In any business or industry, people, or human capital, is the fundamental asset. I’m tired of hearing about talent: talent must be trained! And that’s why U-tad came about. In my experience on the internet, it is always very difficult to find talented workers.

The project was born in 2008 and the first course started in 2011. There was a learning phase. U-tad was not born as a university center, but with the idea of training people. We made it a university because we had to make this sector visible and more prestigious. In 2022 there is still resistance to things that are not so new, such as video games. But this is where the jobs are! It’s a big industry. Our offer includes software engineering, big data…

M.I.A.: What programs do you offer?

M.I.A.: Why did you decide to open U-tad in Madrid?

I.P.D.: Because we were already here. And there are no better places in Spain. We have always had the possibility of establishing ourselves outside of Spain, but there was a vocation to do it here. It is not an exclusively business project; if I did it for the money, I would have dedicated myself to something else. Why make video games and go against the grain? Well, because it can be done. It’s very tiring to be always hearing “you can’t do this, this is for the English speakers”.

When we came up with Commandos we had very harsh reviews. The most important video game magazine in the United Kingdom said that in Spain there were only donkey taxis and oranges. Well, no, there were also some guys making a video game. Ten years later they said it was one of the best video games ever for PC. We set up U-Tad in Madrid because we were already here, but also because we didn’t feel like doing it anywhere else.

M.I.A.: Nor in any other Spanish city?

I.P.D.: I think that in Spain there is no other place for a project like this.

M.I.A.: What percentage of Spanish and foreign students do you have?

I.P.D.: We are a rare case. Now we are launching online degrees, because until last year it was all face-to-face or face-to-face/remote. Historically, 40% of our students are from outside Madrid, which is quite gratifying. We have more and more foreigners, but they are a small number. We have never tried to attract them.

M.I.A.: Are you in contact with companies in the sector to define the programs and hire teachers?

I.P.D.: We are the sector! One of our marketing team members comes from the video game industry, another from specialized magazines in the sector. Our academic director worked with me as an animation producer. 80% of our teachers are professionally active. We are more industry than university.

M.I.A.: How do you see the university offer in Madrid, both in general and in terms of digital creation?

I.P.D.: When something works, someone will copy it. We created something that did not exist, and people took note.

U-tad is a very personal project. Before setting it up, we collaborated with many Spanish universities. The Complutense video game courses were set up by us. Same in Valencia. Before starting, we spoke with private universities in Madrid so that they would be the ones to set it up. And nobody wanted to. They said: the market is not ready. This was back in 2008. I played my first video game in ’74. People have now assimilated U-tad’s ideas.

M.I.A.: U-tad has been recognized as the fourth best center in Europe and the sixth in the world to study video game creation. What makes U-tad special?

I.P.D.: That we are for real. I think not everyone is. Our commitment to striving for excellence and quality is true. That has a huge cost. The people who work here are happy but the job they do is highly demanding. The secret of U-tad is not the qualifications, but to be committed to what we do. If a teacher does not meet expectations, he or she is replaced. We bring in teachers from abroad, there are people for whom we pay an airfare every week. We employ 300 teachers a year, which is a lot for the number of students we have. We are looking for highly specialized people.

We are talking about education. And I don’t want to make mistakes. One can survive a bad master’s degree, but four years studying a degree is a decision that conditions you if you make a mistake. It is the most important professional decision you make in your life. Many universities focus on postgraduate courses because they are more commercial. But degrees are more complex and take longer to build. 80% of our students are undergraduates. Taking in a youngster at 18 and letting him go at 23 is a very serious commitment.

M.I.A.: Madrid is becoming a hub for creative and cultural industries. What is your vision of the ecosystem and which actors would you highlight?

I.P.D.: It is the question that I have been pondering for 25 years, and it is not easy. We are talking about the largest industry in the world by far. You can talk about the car and the pharmaceutical industry, but in the end it all comes down to Apple, Google, Microsoft… These are the largest companies created in the last twenty years and have the highest capitalization. We are competing against giants.

U-tad is known for training in digital entertainment, which is a big industry that’s part of that big digital industry, but our biggest growth area is engineering. We train engineers who, for the most part, don’t go into creative industries.

We tend to underestimate the size of the challenge. The level of resources and support must be a lot bigger. And this is only possible at the national level. A community or council can favor a particular ecosystem, but help has to come from above. I have tried with different governments. The idea was that: we needed a global plan, like the ADO (Olympic Sports Association). To have good athletes you need sports schools and a professional outlet. Talent, knowledge and investment. But nothing by itself is going to get you out of trouble. You need to create that ecosystem in which each of the parties interacts.

There was a time in Spain when capital was the buzzword. And I said: but don’t invest money if you don’t know where to put it! Right now, more than in education, I would invest in communication. In the integration of all these parts, in a facilitator between companies, entrepreneurs and students. Capital must be made aware of talent. It happens more and more, but the traditional model of the chambers of commerce must be taken to the next level.

M.I.A.: Large companies and international funds show a growing interest in accessing the Spanish market through acquisitions of local studios. For example: Skydance investing in Ilion, Tencent in Tequila Works, 2K buying Elite3d, Take-Two taking over Social Point… Where is the balance between helping local studios grow and the boost that these investments represent?

I.P.D.: I see a part as positive. Capital and the purchase of companies is a shame. It’s like going for gold and getting silver. When Ilion was a Spanish company, decision makers and shareholders were in Madrid; now they are in Los Angeles. But there are 600 people in a top-level project with top salaries, who will become independent over time, set up their businesses, help others… That part of knowledge is essential. The sad thing would be to buy a company and take it elsewhere.

What happened to the car sector in Spain? Many factories came because it was cheap. Ilion is not in Spain because it is cheap, but because it is not expensive. Madrid combines not being expensive with other attractions.

M.I.A.: What are the strong points of Madrid?

I.P.D.: The city itself is a huge asset, just like Barcelona was in its day. Madrid was more traditional and that has changed, and the city is gaining ground. People recommend it. One can eat well, it has good weather, it is a fun city. A friend of mine supervises a studio in Montreal, where there is a gigantic local industry, and he says: watch out for Madrid!

I.P.D.: I was in touch with all the administrations for a long time. I set up the digital content group at the Ametic employer association. But to this day no, I don’t have any contact with them, but U-tad does. It is part of the City Council’s video game cluster.

M.I.A.: If you had to choose a problem to solve now, what would it be? How can the Administration help?

I.P.D.: Ten years ago, I worked with the secretary of state of the Ministry of Industry preparing the Spanish digital agenda. The subject of the technological hubs was very hard because it was at odds with the regional ones and the money had to be distributed among all the communities. In the United States, the industry is concentrated in four states. You can’t have a technology park in every province. This requires concentration.

When the conditions exist, private management is fine. But when they don’t and you have to make an effort to create them, public-private collaboration is essential. How to manage it is the secret. If you rely too much on the public sector, inefficiencies may arise; if you give too much importance to the private sector, the private sector can be too selfish. Public-private collaboration mechanisms must be created. This sounds nice, but it’s complicated.

I would ask for more collaboration. It is impossible to get anywhere if each administration does its own thing. In Madrid, the Community and the City Council must have a single plan, a single vision without stepping on each other’s toes. Within all these policies, I would say that coordination is vital.